Sam Ash, CEO and David Wiens, CFO to host Live Interactive Virtual Investor Event on Wednesday, June 16 @ 11:00am ET / 8:00am PT. Investors are invited to register for this event at: LINK

The program, scheduled for Q3 2021, will be conducted as a high-resolution 3D IP (DCIP) survey method from Dias Geophysical Ltd utilizing their proprietary DIAS32 survey system. The total coverage area will span approximately 6 square kilometers (1,500 acres) to a depth of 400 meters (1,300 feet) over previously un-explored ground immediately south and south-west of historic underground workings, with the objective of identifying near-surface drilling targets that are directly accessible from existing works.

Sam Ash CEO stated, “The historic mine workings at Bunker Hill cover only 900 acres of the 5,800-acre land package. We are excited to be testing the portion of the property immediately to the south of these workings, which is un-explored and has the potential for the discovery of significant additional mineralization.”

The geophysics program will be constructed with lines run in a SW/NE direction, crossing perpendicular to the general orientation of prominent fault structures and zinc dominant ore bodies. The 3D nature of the survey, in combination with a common voltage referencing (data collected perpendicular to line orientation) technique, will also work to image the silver-dominant structures which have been mapped in a general NE/SW orientation.

Due to the narrow nature of the ore bodies and veins, a line spacing of 150m was selected to be run over the entire survey boundary to maintain a high-resolution product. At this spacing, imagery should be acquired to a maximum depth of 400m. 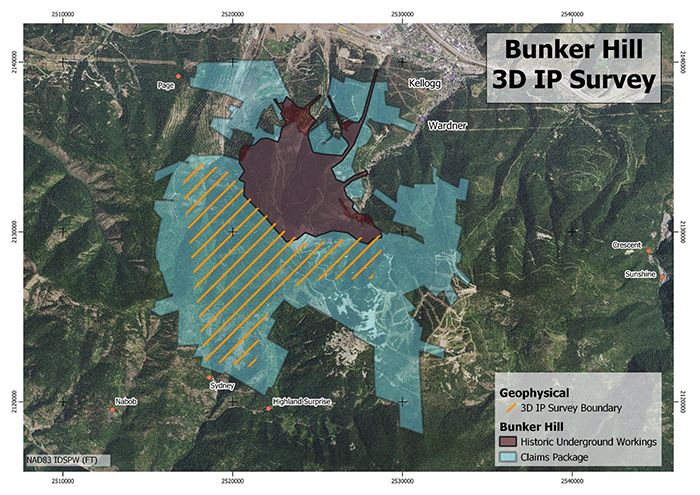 Note: The towns of Kellogg and Wardner, ID are also shown, along with adjacent mines.

The structural patterns identified at the Bunker Hill mine from the site’s extensive map collection show numerous large-offset faults that have worked to control historically mined structures. There is potential for the additional faults south of the current mined footprint to repeat mineralized sections displayed in the north.

As such, the program seeks to delineate extensions of known mineralized trends, as well as un-identified, adjacent structures just south of historic mine workings. Surface mapping indicates faulted wedges of both Revett and St. Regis quartzites over the survey area. Historically these units hosted the majority of production from the Bunker Hill and many other Silver Valley mines.

Line clearing and surveying are currently underway. The 3D IP survey will be done in conjunction with high-resolution surface lidar and imagery collection over the entirety of the survey boundary.

In addition to the geophysical program, Bunker Hill geologists work to continue the digitization of scanned geologic maps specifically targeting the vein systems worked at the lower portions of the mine. A total of 7 historic mining areas, have been identified as zones where production ceased due to mine closure and remain open at depth. New geologic and sample maps have been located allowing for the complete digitization of vein structure and placement of both channel and muck car samples to generate grade estimations for in-situ mineralization. An updated mine plan will work to extend development past currently planned depths, intersecting the down-dip vein extension to bring silver-lead dominant mineralization into projected mill feed.

Bunker Hill remains one of the more shallowly developed mines in the Silver Valley and prospects of continued high-grade silver veins continuing below the bottom of current development are high. The zonation pattern of increased silver-lead ratio with depth displayed in adjacent Silver Valley mines is projected to be seen at Bunker Hill with continued down-dip development.