Sam Ash, CEO, stated “We are excited to announce the final results of our ground geophysical survey, which indicates that Bunker Hill’s mineral endowment may extend well beyond the historic mine footprint and into the expansive 5,800 acre land package. Our analysis has identified multiple large scale, near-surface zones of potential new mineralization similar to what was historically mined, giving us confidence of possible success in future exploration campaigns.”

The geophysical program, which ended in September of 2021, has now been run through multiple inversion modeling processes to create a high-resolution 3D block model. Previously identified lithologic and structural features are well represented in the data and have allowed for Bunker Hill geologists to further refine geologic models over the program area previously generated from historic mapping programs.

Two key targets have been identified for further exploration: the Rockford Target and Government Gulch Target.

Figure 1: IP Anomalies in Plan-View of Bunker Hill Mine Package 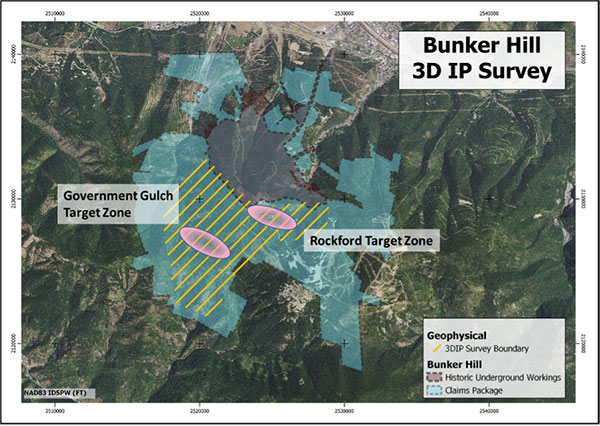 Mineralization at the Bunker Hill Mine is generally associated with 2 main structural orientations: a WNW strike for Zn-Pb-Ag massive to disseminated mineralization, (known locally as the “Bluebird” style mineralization) and a NE trend for Pb-Ag Quartz-Galena vein mineralization. 3D data collection and processing allowed for the survey to investigate both orientations in the same program. The two key anomalies identified are both tabular in nature and have WNW strikes. This orientation, along with their size and close association to known large-scale fault structures, make them similar to the mineralization identified in Bunker Hill’s current Mineral Resource Estimate, effective November 29, 2021.

The Rockford target is hosted at the intersection of the Rockford and Midland faults. Host lithology is the Revett quartzite, here identified by its relatively low IP and high resistivity values. Disseminated pyrite, a dominant feature of the Zn-Pb-Ag mineralization shows an elevated IP response, with a decrease in resistivity. Normal fault wedge-hosted mineralization is known to have existed in multiple locations throughout historic development at Bunker, specifically the March stope which was the single largest producing region of the Bunker Hill mine recording ~4.7Mt of material at 12.03% Pb, 5.22 OPT Ag, and 2.25% Zn. Top of the target zone lies only 150’ from surface, 250’ from the historical mine footprint and is located adjacent to an existing roadway with excellent access for future drill testing. 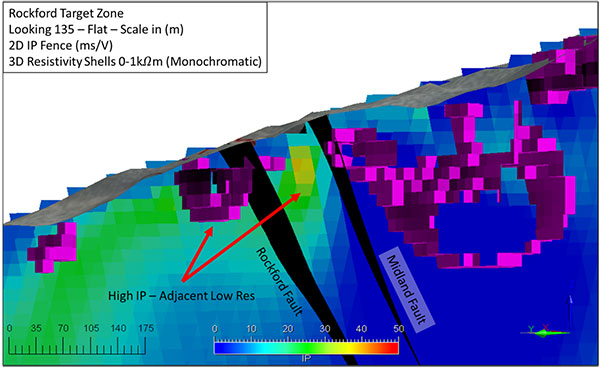 A historic down-hole IP geophysical survey on the 21-level of Bunker Hill shows the IP/resistivity characteristics of both massive and finely disseminated sulfide mineralization within Revett rocks to match those of the Rockford target zone.

The Government Gulch fault brings the deeper Belt series rocks into contact with the Revett quartzites. The GG target zones lie approximately 900’ in the hanging wall of the Government Gulch fault structure and both strike NW with an approximately vertical, slightly NE dip. The tabular nature of the targets shows well defined, along-strike truncation of the combined high IP response with very low resistivity values, separating the target zone from other similar response characteristics of the Prichard thought to identify stratigraphically constrained beds with elevated pyrite content. The larger of the zones measures approximately 1000’ along strike, 250’ wide and 700’ down dip, placing it on the same scale as the largest-ever identified, continuously mineralized zone at Bunker Hill, the Quill-Newgard.

The top of the GG target zone lies less than 400’ surface and directly adjacent to the already established road network used for the mobilization of the geophysical program. Bunker Hill is currently developing options to mobilize an exploration program to advance and delineate both the Rockford and GG target zones.

Mr. Scott E. Wilson, CPG, President of Resource Development Associates Inc. and a consultant to the Company, is an independent “Qualified Person” as defined by NI 43-101 and is acting as the Qualified Person for the Company. He has reviewed and approved the technical information summarized in this news release.

The Qualified Person has verified the information disclosed herein, including the sampling, preparation, security and analytical procedures underlying such information, and is not aware of any significant risks and uncertainties that could be expected to affect the reliability or confidence in the information discussed herein.

Under new Idaho-based leadership the Bunker Hill Mining Corp, intends to sustainably restart and develop the Bunker Hill Mine as the first step in consolidating a portfolio of North American precious-metal assets with a focus on silver. Information about the Company is available on its website, www.bunkerhillmining.com, or within the SEDAR and EDGAR databases.

Forward looking information in this news release includes, but is not limited to, the Company’s intentions regarding its objectives, goals or future plans and statements. Factors that could cause actual results to differ materially from such forward-looking information include, but are not limited to: the ability to predict and counteract the effects of COVID-19 on the business of the Company, including but not limited to the effects of COVID-19 on the price of commodities, capital market conditions, restriction on labour and international travel and supply chains; failure to identify mineral resources; failure to convert estimated mineral resources to reserves; the inability to complete a feasibility study which recommends a production decision; the preliminary nature of metallurgical test results; the Company’s ability to restart and develop the Bunker Hill Mine and the risks of not basing a production decision on a feasibility study of mineral reserves demonstrating economic and technical viability, resulting in increased uncertainty due to multiple technical and economic risks of failure which are associated with this production decision including, among others, areas that are analyzed in more detail in a feasibility study, such as applying economic analysis to resources and reserves, more detailed metallurgy and a number of specialized studies in areas such as mining and recovery methods, market analysis, and environmental and community impacts and, as a result, there may be an increased uncertainty of achieving any particular level of recovery of minerals or the cost of such recovery, including increased risks associated with developing a commercially mineable deposit with no guarantee that production will begin as anticipated or at all or that anticipated production costs will be achieved; failure to commence production would have a material adverse impact on the Company's ability to generate revenue and cash flow to fund operations; failure to achieve the anticipated production costs would have a material adverse impact on the Company's cash flow and future profitability; delays in obtaining or failures to obtain required governmental, environmental or other project approvals; political risks; changes in equity markets; uncertainties relating to the availability and costs of financing needed in the future; the inability of the Company to budget and manage its liquidity in light of the failure to obtain additional financing, including the ability of the Company to complete the payments pursuant to the terms of the agreement to acquire the Bunker Hill Mine Complex; inflation; changes in exchange rates; fluctuations in commodity prices; delays in the development of projects; capital, operating and reclamation costs varying significantly from estimates and the other risks involved in the mineral exploration and development industry; and those risks set out in the Company’s public documents filed on SEDAR. Although the Company believes that the assumptions and factors used in preparing the forward-looking information in this news release are reasonable, undue reliance should not be placed on such information, which only applies as of the date of this news release, and no assurance can be given that such events will occur in the disclosed time frames or at all. The Company disclaims any intention or obligation to update or revise any forward-looking information, whether as a result of new information, future events or otherwise, other than as required by law. No stock exchange, securities commission or other regulatory authority has approved or disapproved the information contained herein.

This press release has been prepared in accordance with the requirements of the securities laws in effect in Canada, which differ from the requirements of U.S. securities laws. Unless otherwise indicated, all resource and reserve estimates included in this press release have been disclosed in accordance with NI 43-101 and the Canadian Institute of Mining, Metallurgy, and Petroleum Definition Standards on Mineral Resources and Mineral Reserves. NI 43-101 is a rule developed by the Canadian Securities Administrators which establishes standards for all public disclosure an issuer makes of scientific and technical information concerning mineral projects. Canadian disclosure standards, including NI 43-101, differ significantly from the requirements of the United States Securities and Exchange Commission (“SEC”), and resource and reserve information contained in this press release may not be comparable to similar information disclosed by U.S. companies. In particular, and without limiting the generality of the foregoing, the term “resource” does not equate to the term “reserves”. Under U.S. standards, mineralization may not be classified as a “reserve” unless the determination has been made that the mineralization could be economically and legally produced or extracted at the time the reserve determination is made. The SEC’s disclosure standards normally do not permit the inclusion of information concerning “measured mineral resources”, “indicated mineral resources” or “inferred mineral resources” or other descriptions of the amount of mineralization in mineral deposits that do not constitute “reserves” by U.S. standards in documents filed with the SEC. Investors are cautioned not to assume that any part or all of mineral deposits in these categories will ever be converted into reserves. U.S. investors should also understand that “inferred mineral resources” have a great amount of uncertainty as to their existence and great uncertainty as to their economic and legal feasibility. It cannot be assumed that all or any part of an “inferred mineral resource” will ever be upgraded to a higher category. Investors are cautioned not to assume that all or any part of an “inferred mineral resource” exists or is economically or legally mineable. Disclosure of “contained ounces” in a resource is permitted disclosure under Canadian regulations; however, the SEC normally only permits issuers to report mineralization that does not constitute “reserves” by SEC standards as in-place tonnage and grade without reference to unit measures. The requirements of NI 43-101 for disclosure of “reserves” are also not the same as those of the SEC, and reserves disclosed by the Company in accordance with NI 43-101 may not qualify as “reserves” under SEC standards. Accordingly, information concerning mineral deposits contained in our website may not be comparable with information made public by companies that report in accordance with U.S. standards.