TORONTO, Aug. 23, 2021 (GLOBE NEWSWIRE) -- Bunker Hill Mining Corp. (the “Company”) (CSE: BNKR, OTCQB: BHLL) is pleased to provide updated drill results from its Phase II program, including intercepts from silver-lead vein extensions delineated through testing of the down-dip and off-set portions of the Jersey-Deadwood vein system on the 9-level.

Sam Ash, CEO of Bunker Hill Mining, stated: “These encouraging results represent mineralized extensions of previously mined structures within the upper part of the mine. These are open along strike or at depth. Combined with the ongoing compilation and re-interpretation of historic data, these results indicate some of the significant upside potential of the mine beyond its existing resource envelope.”

Reported intercept widths were lower than anticipated due to poor core recovery through the mineralized zone, caused by the significant contrast in rock competency between the mineralized material and the host quartzites. Refined drilling techniques and drill bit options have been employed to improve recoveries going forward.

The Jersey-Deadwood zone was historically worked on three main structures: the Jersey Vein, the Jersey Fault Vein and the Deadwood Flat Vein. All three structures historically reported silver-lead dominant production and were some of the last worked stopes before mine closure. This area was chosen as a recent exploration focus due to its accessibility and the ability to drill multiple targets with limited movement of the drill rig.

Holes 7080-7082 were drilled to test the southern extension of the Jersey vein off-set by a fault that historically had stopped the advance of stoping on multiple floors (Image 1). The Deadwood and Jersey structures tested in this phase remain either open at depth or along strike for future exploration and development.

Image 1: Geologic map of the 8 th floor of the 09-Level Jersey Stope showing the cross-cutting fault truncating historic stoping. Drill hole 7081 is shown with vein intercept indicating the extension of the Jersey vein south of the x-fault.

The Company is also progressing its previously announced high-resolution 3DIP ground geophysical survey program, with the intention of delineating additional mineralized target zones outside of the historical mine footprint. The survey is currently underway and preliminary results show a high quality of data acquisition. Covering ~1,500 acres of previously un-explored terrain, the program seeks to investigate multiple off-set segments of the Revett quartzite, known as the host lithology to most of the Coeur d’Alene district’s historic mining production. Also shown is the upper unit of the Prichard formation marking the transition from the main Prichard rocks, host to a majority of the Yreka mining district’s historical production, to middle Belt series rocks. 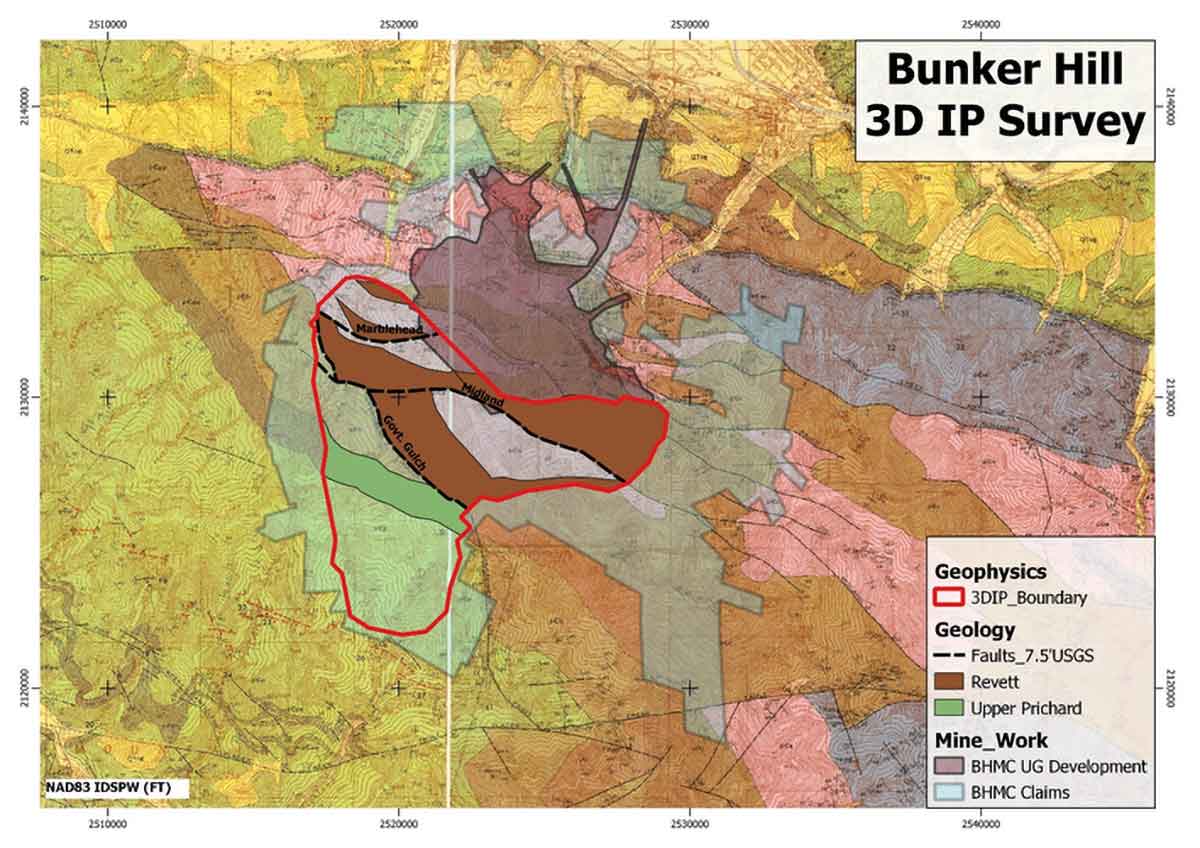 Image 2: 7.5’ USGS geologic maps for the Smelterville and Kellogg quadrangles with highlighted lithology and major faults over the 3DIP survey boundary.

Numerous large-offset faults traverse the survey area. Final data will help to further constrain the movement along these structures and aid in locating potential mineralization associated with the structures themselves. Surveying to a depth of ~400m, program results will allow for the development of future exploration programs, both on surface and from previously developed underground workings.

Results from the program are expected in the fourth quarter of 2021.

The diamond drilling program used HQ-size core. Bunker Hill followed standard QA/QC practices to ensure the integrity of the core and sample preparation through delivery of the samples to the assay lab. Drill hole collar locations were surveyed using modern survey techniques to provide positioning of each sample in three-dimensional space. The drill core was stored in a secure facility, photographed, logged, split into halves (upon geologist discretion), and sampled based on lithologic and mineralogical interpretations. Standards of certified reference materials, field duplicates and blanks were inserted as samples shipped with the core samples to the lab.

Mr. Scott E. Wilson, CPG, President of Resource Development Associates Inc. and a consultant to the Company, is an Independent “Qualified Person” as defined by NI 43-101 and is acting at the Qualified Person for the Company. He has reviewed and approved the technical information summarized in this news release.

Under new Idaho-based leadership the Bunker Hill Mining Corp, intends to sustainably restart and develop the Bunker Hill Mine as the first step in consolidating a portfolio of North American precious-metal assets with a focus on silver. Information about the Company is available on its website, www.bunkerhillmining.com, or within the SEDAR and EDGAR databases.

Certain statements in this news release are forward-looking and involve a number of risks and uncertainties. Such forward-looking statements are within the meaning of that term in Section 27A of the Securities Act of 1933, as amended, and Section 21E of the Securities Exchange Act of 1934, as amended, as well as within the meaning of the phrase ‘forward-looking information’ in the Canadian Securities Administrators’ National Instrument 51-102 – Continuous Disclosure Obligations. Forward-looking statements are not comprised of historical facts. Forward-looking statements include estimates and statements that describe the Company’s future plans, objectives or goals, including words to the effect that the Company or management expects a stated condition or result to occur. Forward-looking statements may be identified by such terms as “believes”, “anticipates”, “expects”, “estimates”, “may”, “could”, “would”, “will”, or “plan”. Since forward-looking statements are based on assumptions and address future events and conditions, by their very nature they involve inherent risks and uncertainties. Although these statements are based on information currently available to the Company, the Company provides no assurance that actual results will meet management’s expectations. Risks, uncertainties and other factors involved with forward-looking information could cause actual events, results, performance, prospects and opportunities to differ materially from those expressed or implied by such forward-looking information. Forward looking information in this news release includes, but is not limited to, the Company’s intentions regarding its objectives, goals or future plans and statements. Factors that could cause actual results to differ materially from such forward-looking information include, but are not limited to: the ability to predict and counteract the effects of COVID-19 on the business of the Company, including but not limited to the effects of COVID-19 on the price of commodities, capital market conditions, restriction on labour and international travel and supply chains; failure to identify mineral resources; failure to convert estimated mineral resources to reserves; the inability to complete a feasibility study which recommends a production decision; the preliminary nature of metallurgical test results; delays in obtaining or failures to obtain required governmental, environmental or other project approvals; political risks; changes in equity markets; uncertainties relating to the availability and costs of financing needed in the future; the inability of the Company to budget and manage its liquidity in light of the failure to obtain additional financing, including the ability of the Company to complete the payments pursuant to the terms of the agreement to acquire the Bunker Hill Mine Complex; inflation; changes in exchange rates; fluctuations in commodity prices; delays in the development of projects; capital, operating and reclamation costs varying significantly from estimates and the other risks involved in the mineral exploration and development industry; and those risks set out in the Company’s public documents filed on SEDAR. Although the Company believes that the assumptions and factors used in preparing the forward-looking information in this news release are reasonable, undue reliance should not be placed on such information, which only applies as of the date of this news release, and no assurance can be given that such events will occur in the disclosed time frames or at all. The Company disclaims any intention or obligation to update or revise any forward-looking information, whether as a result of new information, future events or otherwise, other than as required by law. No stock exchange, securities commission or other regulatory authority has approved or disapproved the information contained herein.